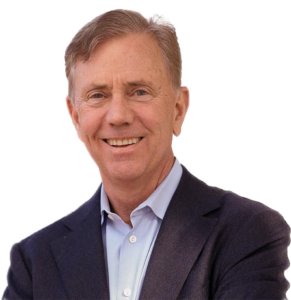 Edward Miner “Ned” Lamont, Jr. was sworn into office on January 9, 2019 as the 89th governor of Connecticut.

Lamont got involved in public service shortly after college, founding a weekly newspaper in a town hit by the loss of its largest employer. Covering town meetings and the Board of Selectmen, he helped to bring voice and transparency to a community working to recover from job losses and reinvent itself. Later, as a member of both the Greenwich Board of Selectmen and the Board of Estimate and Taxation, Lamont worked in a bipartisan effort to safeguard a multimillion-dollar budget and deliver results for constituents. For four years, Lamont also served as Chairman of the State Investment Advisory Council, overseeing a multibillion-dollar state pension fund.

Lamont started his own company, taking on the large and established giants of the telecom industry. Under his vision and stewardship, the company grew to serve over 400 of America’s largest college campuses and 1 million college students across the nation.

As a volunteer teacher, Lamont sought to give back to his community by volunteering at Harding High School in Bridgeport. In an effort to spark entrepreneurship, Lamont taught students about the inner-workings of small businesses, bringing in local businesspeople to share their own experiences, and helping to place students in local internships. Lamont is on the faculty of Central Connecticut State University as an adjunct professor of political science and philosophy, where he also helped to found a popular business start-up competition. In early 2009, he helped lead an initiative to bring together Connecticut leaders from across the business, nonprofit, and labor sectors to unite in a strategy to create new jobs in the state.

As a candidate for United States Senate in 2006, he stood up for his convictions and challenged the political establishment. Taking on long-time incumbent Joe Lieberman for the Democratic nomination for United States Senate, Lamont campaigned on the platform that wars in the Middle East were draining resources and attention that could be better focused on pressing domestic issues like the economy, education, and healthcare. As a private citizen, he fought for the issues in which he believes, serving on the boards of Mercy Corps and the Conservation Services Group, non-profits which seek to make a difference in the humanitarian and renewable energy fields, respectively.

Lamont was born on January 3, 1954, in Washington, D.C. to Camille Helene and Edward Miner Lamont. The eldest of three children, he attended Phillips Exeter Academy, and served as president of the student newspaper, The Exonian. After graduating Phillips Exeter in 1972, he earned a Bachelor of Arts in sociology from Harvard College in 1976 and a Master of Business Administration from the Yale School of Management in 1980.

Lamont married his wife Annie on September 10, 1983. They have three children: Emily, Lindsay, and Teddy. 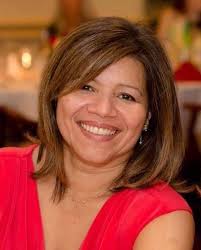 Appointed by Governor Ned Lamont, Commissioner Seila Mosquera-Bruno brings a wealth of knowledge to the Department of Housing.  Prior to her appointment, Seila was the President and Chief Executive Officer of the Mutual Housing Association of South Central Connecticut, Inc., dba NeighborWorks® New Horizons. NWNH is a non-profit 501(c)(3) organization dedicated to providing affordable housing opportunities to help build strong communities and revitalize neighborhoods. Since joining NWNH in 1994, Seila served in many different capacities and became the Executive Director in 2003. Under her leadership, the organization expanded operations beyond New Haven County to New London and Fairfield Counties, managed 38 employees and $100 million in Assets.

Seila has a Master’s degree in Urban Studies from Southern Connecticut State University, a Bachelor in Business Administration from Charter Oak College, and completed the Achieving Excellency in Community Development 18-month fellowship program at Harvard University’s John F. Kennedy School of Government. Seila has vast and extensive experience in advocating for affordable housing on a state and national level and has participated in many organizations to help strengthen communities. Seila was a Board Member of the National NeighborWorks Association and Co-chair of the NWA National Real Estate Development Advisory Council.

Seila was on the Board of The Connecticut Legal Rights Project. She is a member of the Reaching Home Campaign and the Home Connecticut Steering Committee. In 2004 Seila received the Forty under 40 Award from New Haven Business Times; in 2007 she received the Housing Good Egg Award and in 2009 was recognized as a Rising Star by Business New Haven. In 2010, Seila was inducted into the Gateway Community College Foundation’s Hall of Fame for her exceptional contributions to the community. In 2014 she was named one of the 50 most influential Latinos in Connecticut recognized by Latinos United for Professional Advancements (LUPA). In April 2015 she joined the Federal Home Loan Bank of Boston Advisory Council and in 2017 joined the Santander Bank Community Advisory Board.  Seila has been a speaker at several local and national venues on housing related issues. She conducted conferences in capacity-building and provided technical assistance to non-profits in Guayaquil, Ecuador. In 2018 she spearheaded a partnership with NWNH and NHS Puerto Rico to assist in their recovery efforts after Hurricane Maria. Seila lives in Milford with her husband and youngest daughter.

Housing 2019: The 30th Annual Conference of the Affordable Housing Alliance

Here at the Affordable Housing Alliance, we are gearing up for our annual housing conference; where our goal is to provide everyone working in Connecticut’s affordable housing industry the opportunity to explore common challenges, examine the latest information, share best practices and celebrate affordable housing successes. Please join us for the state’s largest gathering of affordable housing developers, service providers, advocates and resident leaders. The day-long conference draws approximately 400 attendees from every part of Connecticut. Don’t miss the housing event of the year! Come be a part of what’s happening!